Stable and secure power generation is essential for telecommunication companies. We guarantee the failure-free operation of the telecommunications network. But Deutsche Telekom’s best network is also sustainable and operated in an energy-efficient manner.

The demand for electrical energy is increasing worldwide. What is needed are future technologies that are compatible with today’s industrial landscape: That is why we are testing two stationary solid oxide fuel cells (SOFCs) from Bosch in a pilot project. With these systems, it is possible to generate – in a decentralized and very efficient way – sustainable electricity for the use in network technology facilities – as in this case.

Since February 2022, two stationary solid oxide fuel cell systems from Bosch power the servers at a Telekom location. They utilize an electrochemical process to generate electrical energy from natural gas or biomethane, optionally with an admixture of hydrogen. This reaction also produces heat. When, in the future, an SOFC is fueled with green hydrogen (i.e., hydrogen produced with electricity generated from renewable energy), the power and heat produced will be completely carbon free.

The innovative SOFC system promises a big potential for the future. A SOFC unit houses several hundred fuel cells. These are piled into stacks, which constitute the engine of the electrochemical process. Each SOFC unit generates around ten kilowatts (kW) of electricity and around 3 kW of heat. Over the course of a year, this amounts to some 80,000 kilowatt-hours (kWh) of electricity — enough to cover the annual power needs of 20 or more four-person households. This process also produces thermal energy, which can be utilized either to heat buildings or to produce — by means of an absorption chiller — chilled water with which to cool servers.

Furthermore, SOFC systems are very versatile when it comes to the choice of energy carrier. In the Berlin pilot project, we are currently using natural gas, as there is no local hydrogen infrastructure in place. In the long term, however, we intend to switch the two pilot units to a more sustainable energy carrier. Even when running on natural gas, the SOFC is considerably more environmentally friendly than some other forms of power generation: carbon emissions are around two-thirds lower than coal-fired generation in Germany, and virtually no nitrogen oxide or particulate emissions are produced. In the future, when an SOFC is run exclusively on sustainably produced hydrogen, carbon emissions will be completely eliminated.

“SOFC technology enables us to eliminate grid losses,” Schulte-Sprenger (CEO of PASM) explains. “And by using the heat that is also generated, we can boost overall energy efficiency at individual locations.” What’s more, by generating its own power, Deutsche Telekom also avoids having to pay grid fees, thereby reducing its costs.

At present, the two SOFC units in Berlin provide only a fraction of the energy required there. “After after a successful pilot phase, we can readily imagine installing SOFC systems as an important technology at of our sites – ideally, of course, run on green hydrogen,” says Bernd Schulte-Sprenger. This would mark another important step on the way to fully sustainable grid operation. 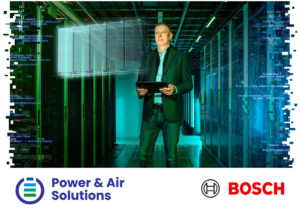